Books I Read in April & Whether or Not You Should Read Them. 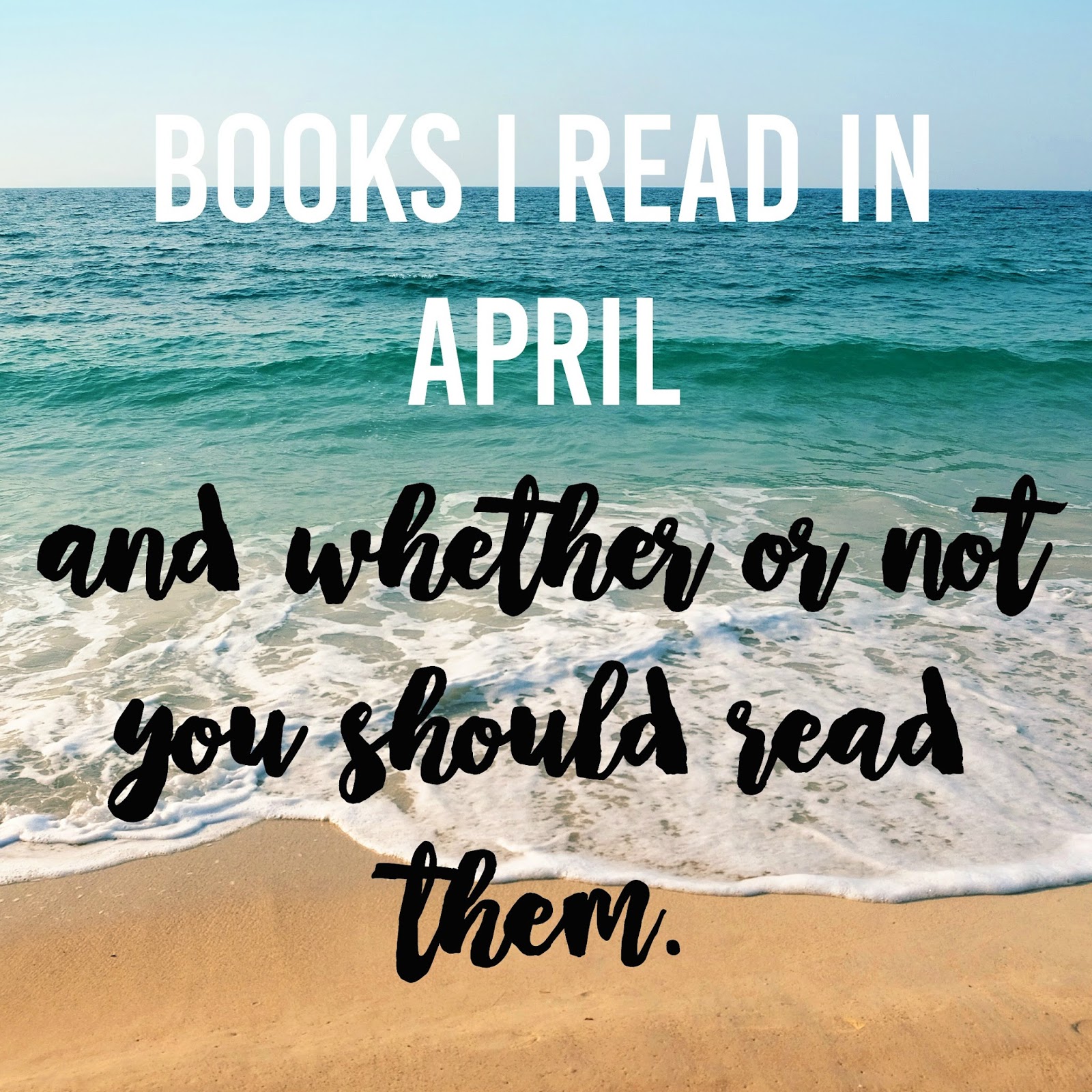 A Separation by Katie Kitamura

Plot: “A young woman has agreed with her faithless husband: it’s time for them to separate. For the moment it’s a private matter, a secret between the two of them. As she begins her new life, she gets word that Christopher has gone missing in a remote region in the rugged south of Greece; she reluctantly agrees to go and search for him, still keeping their split to herself. In her heart, she’s not even sure if she wants to find him. Adrift in the wild landscape, she traces the disintegration of their relationship, and discovers she understands less than she thought about the man she used to love.
A story of intimacy and infidelity, A Separation is about the gulf that divides us from the lives of others and the narratives we create for ourselves. As the narrator reflects upon her love for a man who may never have been what he appeared, Kitamura propels us into the experience of a woman on the brink of catastrophe. A Separation is a riveting stylistic masterpiece of absence and presence that will leave the reader astonished, and transfixed.” –via Goodreads

My thoughts: I do not understand why this book got such awards. I. Hated. It. I didn’t love the writing style, but I can see how some people would (not much punctuation, no quotation marks so it’s hard to know when something is a thought and when it’s said out loud). My problem was that this was, essentially, a plotless book. Truly. Nothing happens. It’s bizarre that’s it’s touted as some big mystery, because it’s not.

Should you read it? No. Hard pass.

Plot: How far would you go to protect your family?

Single dad Ben is doing his best to raise his children alone, with the help of his devoted mother Judi. Life isn’t easy, but Judi’s family means everything to her and together, they manage.

Then Ben meets Amber. Everyone thinks this is a perfect match for Ben but Judi isn’t sure … there’s just something about Amber that doesn’t add up.

The further Judi delves into Amber’s personal life, the closer she gets to shocking secrets that could change everything. And Judi must make a decision that could lead to the most disastrous consequences. –via Goodreads

Favorite quote: “There’s a point at which you may might realize the journey isn’t really for you any more. But every time you get a chance to change paths, you just stay put because it’s easier. You end up trudging along the same old way and watching as life happens to other people as you pass by. Then one day you just stop looking around you.”

My thoughts: My friend Kait recommended this one, and based on her review, I knew I was going to love it. It did NOT disappoint. It was twisty and layered and kept me guessing the whole time. The characters were so well written and I loved their point of views. Everything I want to say about the book, I can’t say without spoiling it. So just read it.

Should you read it? YES.

Plot: Everyone in Shaker Heights was talking about it that summer: how Isabelle, the last of the Richardson children, had finally gone around the bend and burned the house down.

In Shaker Heights, a placid, progressive suburb of Cleveland, everything is meticulously planned – from the layout of the winding roads, to the colours of the houses, to the successful lives its residents will go on to lead. And no one embodies this spirit more than Elena Richardson, whose guiding principle is playing by the rules.
Enter Mia Warren – an enigmatic artist and single mother – who arrives in this idyllic bubble with her teenage daughter Pearl, and rents a house from the Richardsons. Soon Mia and Pearl become more than just tenants: all four Richardson children are drawn to the alluring mother-daughter pair. But Mia carries with her a mysterious past, and a disregard for the rules that threatens to upend this carefully ordered community.
When the Richardsons’ friends attempt to adopt a Chinese-American baby, a custody battle erupts that dramatically divides the town and puts Mia and Mrs. Richardson on opposing sides. Suspicious of Mia and her motives, Mrs. Richardson becomes determined to uncover the secrets in Mia’s past. But her obsession will come at unexpected and devastating costs to her own family – and Mia’s.
Little Fires Everywhere explores the weight of long-held secrets and the ferocious pull of motherhood-and the danger of believing that planning and following the rules can avert disaster, or heartbreak. -via Goodreads

Favorite quote: “Sometimes you need to scorch everything to the ground, and start over. After the burning the soil is richer, and new things can grow. People are like that, too. They start over. They find a way.”

My thoughts: When I was about 1/3 of the way through this book, a friend asked me if I was enjoying it. My answer was that while I loved it so far, I still had no idea what it was actually about.

That’s what made this book so good. It’s about the characters, not about any one event. There is a plot and a big event, but by the time you get there, you’re so invested in the characters and their own explorations that the twists are just background noise, if that makes sense. She writes the most amazing characters, and I was sad when this book was over because I wanted to know even more about them.

What have you read lately? And should I read it?