Books I Read in July (And Whether or Not You Should Read Them). 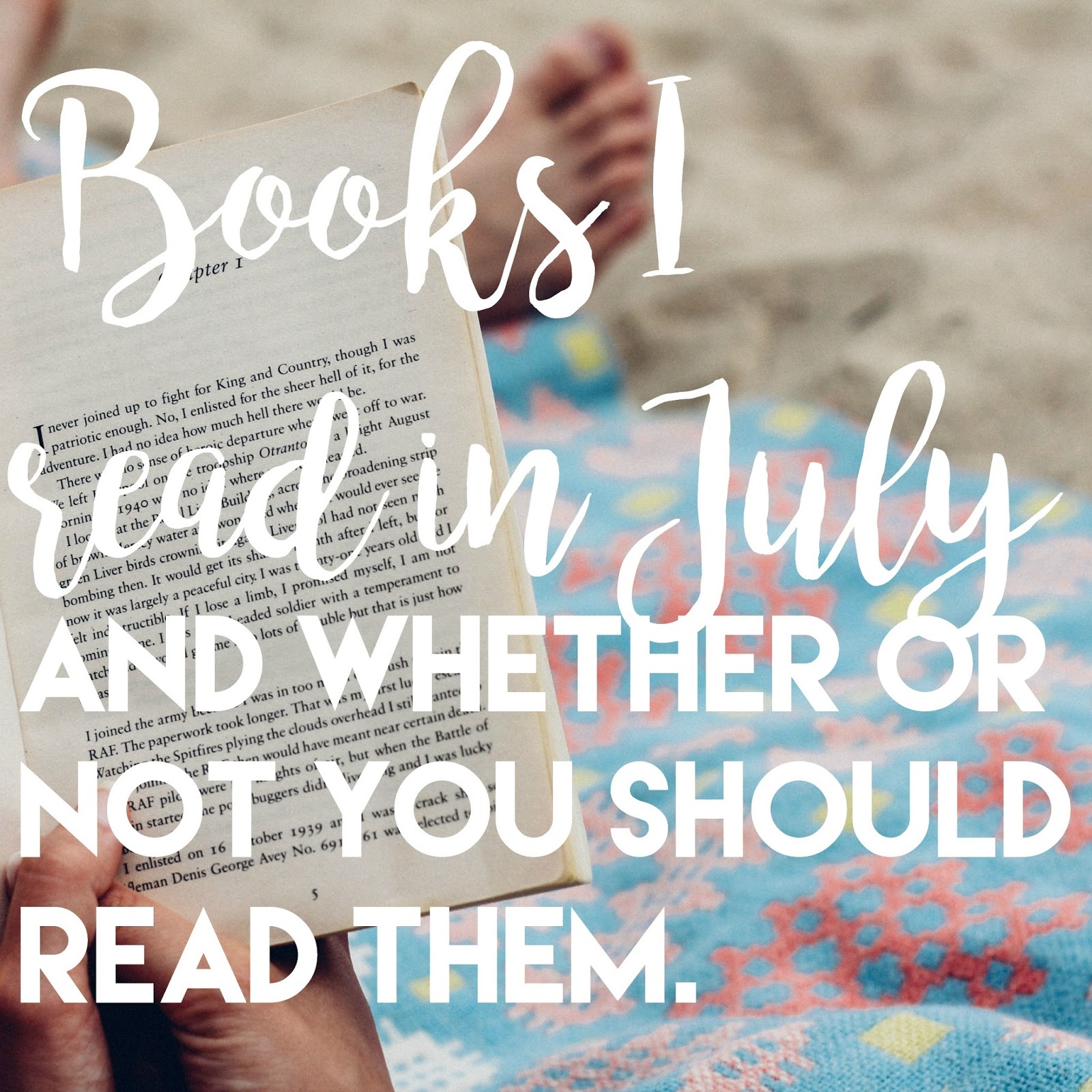 When You Find Out the World is Against You: And Other Funny Memories About Awful Moments by Kelly Oxford

Plot: Kelly Oxford likes to blow up the Internet. Whether it is with the kind of tweets that led Rolling Stone to name her one of the Funniest People on Twitter, or with pictures of her hilariously adorable family (human and animal), or with something much more serious, like creating the hashtag #NotOkay, where millions of women came together to share their stories of sexual assault, Kelly has a unique, razor-sharp perspective on modern life. As a screen writer, professional sh*t disturber, wife and mother of three, Kelly is about everything but the status quo.
Perfect for anyone who ever wished David Sedaris and Mindy Kaling would just finally write a book together already, When You Find Out the World Is Against You is filled with the biting, wise, and laugh-out-loud insights that have won Kelly legions of fans. When You Find Out the World Is Against You is Kelly at her most honest and disarmingly funny best. Her comedic skill, down-to-earth voice and bull’s-eye observations on the absurdity of modern life mean there is nothing quite like seeing the world through Kelly’s eyes. –via goodreads

My thoughts: My knowledge of Kelly Oxford was limited to her hilarious tweets and snapchats, so when I saw this book being hailed as a must-read, especially for anyone with anxiety, I ordered it. And I didn’t finish it, because I decided this year that life is too short to make yourself finish books you don’t like.

I think had I been a big fan of hers and known more about her life, I would have enjoyed it. Instead, it felt like a really choppy, introspective bounce between childhood memories and adulthood stories. She does write with great candor about having anxiety, which I appreciate, but I wasn’t a big fan of the rest.

Should you read it? If you’re already a fan of hers, you’d probably love it. Otherwise, skip it.

All the Missing Girls by Megan Miranda

Plot: It’s been ten years since Nicolette Farrell left her rural hometown after her best friend, Corinne, disappeared from Cooley Ridge without a trace. Back again to tie up loose ends and care for her ailing father, Nic is soon plunged into a shocking drama that reawakens Corinne’s case and breaks open old wounds long since stitched.

The decade-old investigation focused on Nic, her brother Daniel, boyfriend Tyler, and Corinne’s boyfriend Jackson. Since then, only Nic has left Cooley Ridge. Daniel and his wife, Laura, are expecting a baby; Jackson works at the town bar; and Tyler is dating Annaleise Carter, Nic’s younger neighbor and the group’s alibi the night Corinne disappeared. Then, within days of Nic’s return, Annaleise goes missing.

Told backwards—Day 15 to Day 1—from the time Annaleise goes missing, Nic works to unravel the truth about her younger neighbor’s disappearance, revealing shocking truths about her friends, her family, and what really happened to Corinne that night ten years ago.

Like nothing you’ve ever read before, All the Missing Girls delivers in all the right ways. With twists and turns that lead down dark alleys and dead ends, you may think you’re walking a familiar path, but then Megan Miranda turns it all upside down and inside out and leaves us wondering just how far we would be willing to go to protect those we love. –via goodreads “People were like Russian nesting dolls – versions stacked inside the latest edition. But they all still lived inside, unchanged, just out of sight.”

My thoughts: On our road trip up to Virginia, Sam and I listened to this book. This is the first book I’ve ever read that was told backward, and that took a little bit of getting used to. We both said we were trying to build on what we knew about the story, but then would realize you couldn’t do that, because you were going back in time. We also both agreed the backward order would have been easier to read than it was to listen to. In hindsight, I really like it and think it was a super creative way to write this story.

Here’s my personal criteria of what a good mystery is: I want the ending/big reveal/solution to be something that I wouldn’t have guessed, but once I find out, I think, Ohh that makes sense! This one did that.

Should you read it? Yes! Read, not listen.

Into the Water by Paula Hawkins

Plot: A single mother turns up dead at the bottom of the river that runs through town. Earlier in the summer, a vulnerable teenage girl met the same fate. They are not the first women lost to these dark waters, but their deaths disturb the river and its history, dredging up secrets long submerged.


Left behind is a lonely fifteen-year-old girl. Parentless and friendless, she now finds herself in the care of her mother’s sister, a fearful stranger who has been dragged back to the place she deliberately ran from—a place to which she vowed she’d never return.

With the same propulsive writing and acute understanding of human instincts that captivated millions of readers around the world in her explosive debut thriller, The Girl on the Train, Paula Hawkins delivers an urgent, twisting, deeply satisfying read that hinges on the deceptiveness of emotion and memory, as well as the devastating ways that the past can reach a long arm into the present.

Beware a calm surface—you never know what lies beneath. –via goodreads

Favorite quote: “The horrors conjured up by the mind are always so much worse than what is.”

I really enjoyed this story, but there were SO many people essential to the plot that it made it hard to put down and pick up without getting confused. I feel like there were seven or eight stories jammed into one. But it’s worth the read, and I liked how the story was revealed a little bit at a time. It definitely kept me hooked.

What did you read last month?