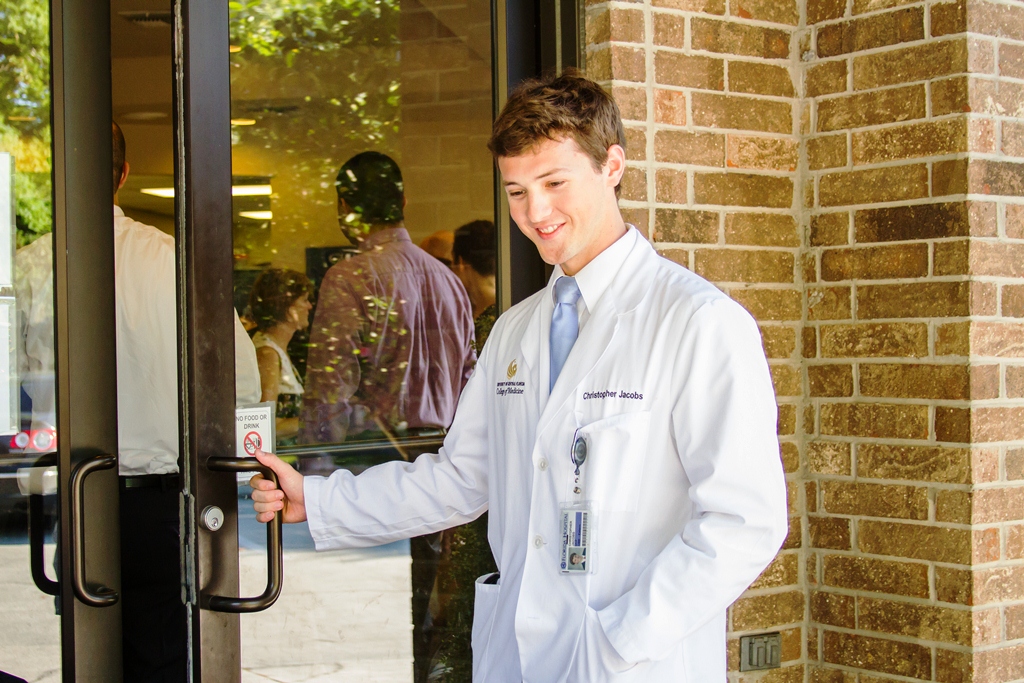 One thousand, three hundred and eighty days ago, I was desperately trying to catch a plane from LA to Orlando. I had been in Los Angeles all week as a sponsor on a youth trip, but I was supposed to fly back Sunday morning because Chris’ White Coat Ceremony was Monday morning.

What happened instead was something like 3 delayed flights, two canceled flights, twelve hours in an airport, and finally getting on a red-eye. I was so tired and ready to sleep, but I ended up in a middle seat between two obnoxious frat guys (Side note: The second they walked on the plane I just knew they were my seat partners. I have bad luck like that) and when I dozed off at first, I woke up to both of them trying to cuddle with my arms (umm, nope), so I didn’t sleep after that.

We made it to Orlando just in time for me to sprint to the parking lot, hop in Christopher’s car, change on the way, and then sprint into the building so he could make it on time for the ceremony.

I’ll be honest: It was a pretty boring ceremony for all those not getting their White Coats. There were so many speeches and questions and answers and it went on and on and on. But it’s a day I’ll never forget. Because at the end, they rolled out this giant chalkboard that said “Good Doctor” at the top. Then the dean asked everyone what they thought it took to be a good doctor. The answers ranged from compassionate to hard-working to endurance. The dean filled the chalkboard–that has stayed in the lobby of the med-school for the past 1,380 days–with at least a hundred answers. And I thought, Wow, Chris is actually all of these things.

Up until that point, my poor, naive self had thought of med-school kind of like a Master’s program. I didn’t yet know all it would entail, didn’t know how hard it was, didn’t know the gravity of making a choice to be a doctor. That day, seeing all of those answers about what it takes to be a good doctor, and seeing Chris get his first white coat…I think that was the first day I imagined him as an actual doctor.

I thought, wow, he’s going to be a really good doctor.

One thousand, three hundred and eighty days have passed since then. They’ve been full. Full of adventure and hard work and tough decisions and sleepless nights and new chapters and happy moments and tears and perseverance. And for him, they’ve been full of every single one of those answers that got written on that chalkboard.

In three days, Chris will graduate and become a doctor. He’ll get to see his dream become a reality. There will be no more one day, no more eventually. There will be graduation, and there will be Christopher, the love of my life, the doctor.

To say I am excited is a massive understatement. Very rarely in life do we get such big moments that mark hard work and success, but Friday is one of those moments.

If you need me, I’ll be dancing around my apartment surrounded by moving boxes, somewhere between packing and procrastinating and celebrating the fact that sometimes, dreams really do come true.